Replay: The Gospel Roots of Rock and Roll 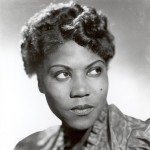 Sister Rosetta Tharpe attained great popularity in the 1930s and 1940s with her gospel recordings that were a unique mixture of spiritual lyrics and early rock and roll. She became the first superstar of gospel music and was an early influence on Elvis Presley, Jerry Lee Lewis, Little Richard, and Johnny Cash. Chris Kjorness (Longwood University) plays some of her groundbreaking recordings and talks about her legacy. Also featured: The Broadway musical has often taken up southern themes, from Show Boat and Porgy and Bess in the first half of the twentieth century to Memphis, which hit the Broadway stage in 2009. For all their popularity, Gary Richards (University of Mary Washington) argues that these musicals nevertheless tend to have a negative view of the South and don’t reflect its diversity today.

Later in the show: Accents can be endearing, but southern students and African American students are often marginalized in the classroom because of their dialects. Anne Harper Charity Hudley (College of William & Mary) is the coauthor of a book to help educators make sure students don’t suffer for the way they talk. And: John Russell Rickford (Stanford University) has written a book on the topic: Spoken Soul: The Story of Black English. Also featured: The Affrilachian Poets are celebrating 20 years. Frank X Walker coined the term in 1991 after he came away from a literary event frustrated by the exclusion of African American writers from Appalachian literature. Theresa Burriss (Radford University) is an expert on the Affrilachians and an honorary member of the group.

When we think of early rock and roll most of us think of musicians like Little Richard, Elvis Presley, and Johnny Cash. But all these legends grew up listening to a gospel musician called Sister Rosetta Tharpe. One Virginia scholar says it’s time to reevaluate her legacy in rock and roll.

Sister Rosetta Tharpe: “The Godmother of Rock and Roll”

Check out Sister Rosetta Tharpe performing in France in 1960.

2 Comments on “Replay: The Gospel Roots of Rock and Roll”