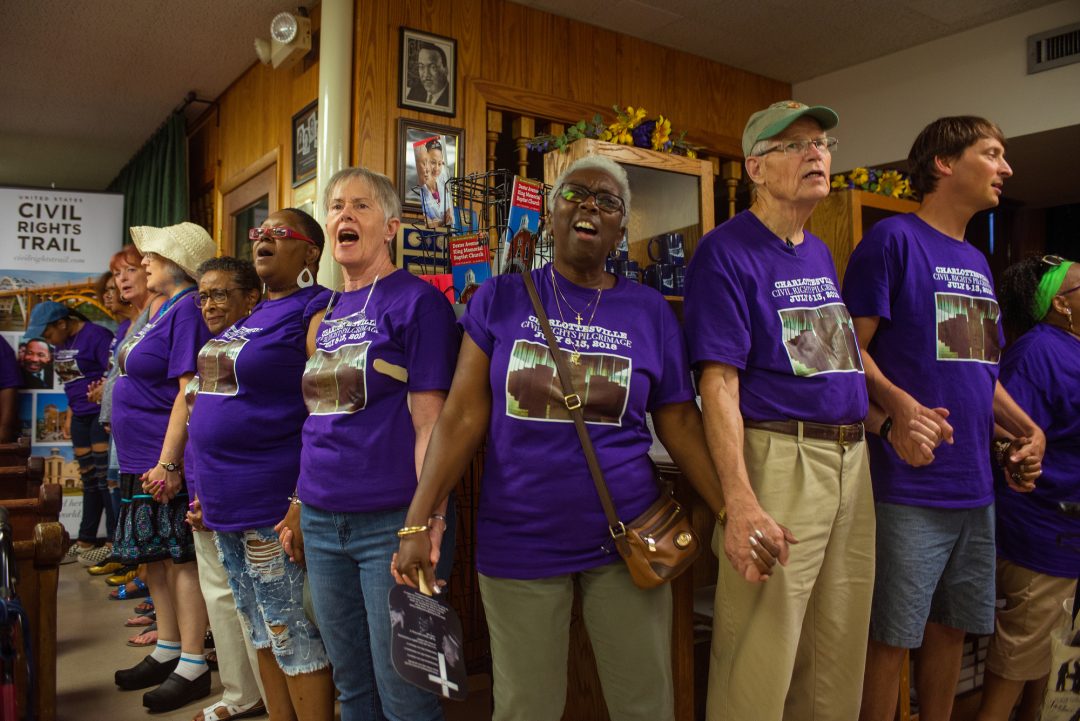 In 2018, a hundred Charlottesville residents traveled to Montgomery, Alabama, to memorialize his death and commit to fighting white supremacy. Professor and organizer Jalane Schmidt talk us through Charlottesville’s Civil Rights Pilgrimage.

At the Center for Civil and Human Rights museum in Atlanta, visitors have an opportunity to experience what it felt like to integrate lunch counters in the US South. Susan Bro and Kathryn Laughon explain their experience at the exhibit, and how it reminded them of the white supremacist attacks in Charlottesville in 2017.

For teachers in Charlottesville, August is an opportunity to reflect on how their classrooms have changed since the white supremacist attacks on August 11 and 12, 2017, and how they plan to teach race going forward. Anne Ernst and Rachel Caldwell discuss racial healing in the classroom.

Content warning: this episode includes vivid descriptions of racial terror lynching, an auditory reenactment of racist assaults on protestors, and a description of police brutality against a black child. Please listen with care.

On July 7th, 2018, a group of almost 100 Charlottesville residents set off to Montgomery. They carried with them a jar of soil, symbolizing the remains of a man named John Henry James. James was lynched in Charlottesville in 1898; no one was ever held responsible for his murder at the hands of a white mob.

Learn more about the story of John Henry James and the legacy of racial terror lynching:

“They Lynched Him:” Richmond Planet article from 1898

“The Train At Wood’s Crossing,” essay by Brendan Wolfe of Encyclopedia Virginia

Lynching in America: Confronting the Legacy of Racial Terror, report by the Equal Justice Initiative

As part of our coverage of the Kellogg Teacher Summer Institute, guest Rachel Caldwell shared her list of picture books about race and identity. Caldwell teaches fourth grade at Burnley-Moran Elementary School in Charlottesville, Virginia.

If you have suggestions to share with Rachel’s students, please feel free to leave a comment below!