The Tragedy of the (Blood) Commons 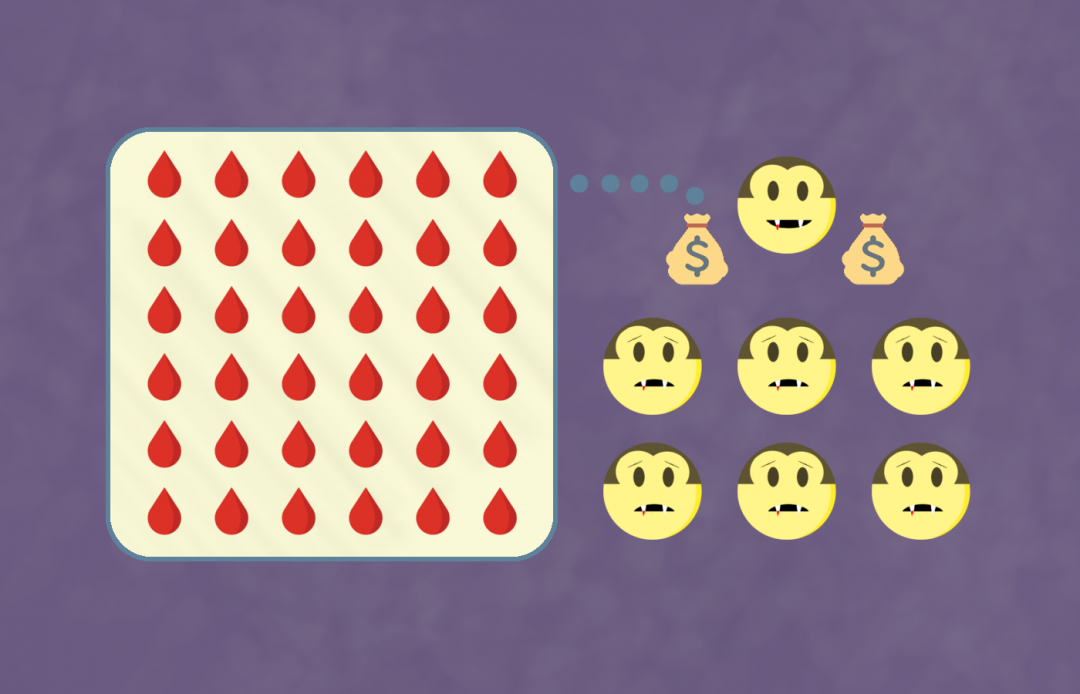 Learn about the Tragedy of the Blood Commons in our interview with Dan Farhat, starting at 16:20, above.

William Forster Lloyd did not, it seems, have a high opinion of his fellow man.

Lloyd wrote at a time in the 19th century when economics was still a young and emerging science. A few decades earlier, an economist named Thomas Malthus had made waves by suggesting that increasing food supply would only lead to a matching increase in population.

In a time when taxes were collected on crops and food shortages were common, the “Malthusian trap”, as it came to be known, suggested there was no way to end of the suffering of the poor — only to increase their number.

But in a series of lectures in 1883, Lloyd recognized that Malnus’ theory had revealed a flaw in one of the sacred principles of economics — human beings, it seemed, could not always be trusted to act rationally.

Instead of enjoying a bountiful harvest and raising their quality of life, the poor were “optimizing their efficiency” for population growth. Peasants would always have more babies, even if it meant a higher likelihood of famine, poverty, and misery down the road.

Lloyd set to work trying to explain (rationally) why prolific peasants would act against their long-term best interest, and why even a campaign of universal “moral restraint” would fail to control human impulse to procreate.

Like most good free-market capitalists, he found the sickness to originate in one thing — the welfare state.

The problem, he said, was that the costs of peasant procreation was borne communally, while the benefits accrued to the family alone. Here he is in his Two Lectures on the Checks to Population:

Suppose the case of two persons agreeing to labour jointly, and that the result of their labour is to be common property. Then, were either of them, at any time, to increase his exertions beyond their previous amount, only half of the resulting benefit would fall to his share; were he to relax them, he would bear only half the loss.

If just entering into a partnership halves your incentives to work hard and minimize costs, he says, just imagine what happens in society, where “the interest [is] so small as to elude perception, and… obtain[s] no hold whatever on the human mind.”

Prudence is a selfish virtue; and where the consequences are to fall on the public, the prudent man determines his conduct by the comparison of the present pleasure with his share of the future ill… This share, in the multitude of a large society, becomes evanescent; and hence, in the absence of any countervailing weight, the conduct of each person is determined by the consideration of the present alone. The present good is chosen; the present evil is refused.

Lloyd decries the effect of a society “where the children are maintained at public tables, or where each family takes according to its necessities out of the common stock.” With the consequences of their overbreeding communally borne, “all are reduced to extreme distress… until, ultimately, the further increase of population is repressed by the undisguised check of misery and want.”

You might think Lloyd sounds like a real hard-hearted guy, but he was actually writing to defend the rationality of the poor against claims that they were not capable of acting in their own interests. But within the logical framework of economics, he could only do so by saying the poor took advantage of a benevolent society.

Lloyd’s lectures came and went, without much notice for more than a century. But in 1968, an American philosopher thought they revealed a fatal flaw in economics.

In his article in Science, Garrett Hardin suggested Lloyd’s hard-heartedness was revealing of a broader problem with the social sciences, which always sought “technical solutions” to what he viewed as problems in philosophy.

Citing a passage from Lloyd, Hardin coined the term “The Tragedy of the Commons” to explain why economic self-interest cannot justify benevolent societies:

The tragedy of the commons develops in this way. Picture a pasture open to all. It is to be expected that each herdsman will try to keep as many cattle as possible on the commons.

Because, as Lloyd determined, the cost of adding a cow is borne communally while the benefits are enjoyed individually…

the rational herdsman concludes that the only sensible course for him to pursue is to add another animal to his herd. And another; and another…. But this is the conclusion reached by each and every rational herdsman sharing a commons. Therein is the tragedy. Each man is locked into a system that compels him to increase his herd without limit — in a world that is limited. Ruin is the destination toward which all men rush, each pursuing his own best interest in a society that believes in the freedom of the commons. Freedom in a commons brings ruin to all.

Hardin offers several solutions for this tragedy, from private property to meritocracy. “They are all objectionable,” he adds,”but we must choose — or acquiesce in the destruction of the commons.”

The Tragedy of the Commons got a passing mention in this week’s episode from Radford University’s Dan Farhat, who is using advanced computer simulations to see Lloyd’s ideas play out in real time.

Interestingly, Farhat has found the Tragedy of the Commons particularly pertinent in a world populated by bloodsucking vampires, who rely on a commonly held (i.e., unowned) stock of humans for both blood and reproduction.

Funnily enough, he found that just like humans, vampires need to control their libido if they want to survive. Here he is in his 2013 paper:

If [the rate at which vampires reproduce] is high, vampires initially flourish. Humans are over-exploited and the vampire population cannot be sustained. Vampires quickly become extinct, but luckily some humans survive to re-populate the world.

There’s some hope for us humans yet.

Check out the papers cited in this post at the links below. University library access may be required for some.

William F. Lloyd – Two Lectures on the Checks to Population (1833)

Garrett Hardin – “The Tragedy of the Commons”, Science Magazine (1968)

Dan Farhat – “The Economics of Vampires: An Agent-based Perspective” (2013)